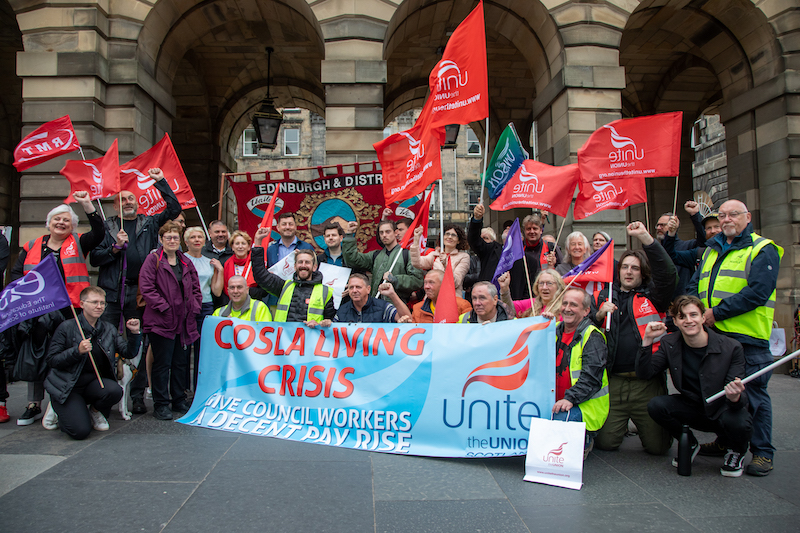 Following a long series of negotiations, including talks with the First Minister, a new pay offer has been put to the unions. Unite, Unison and GMB have all decided to take the deal to their members to vote on.

While the consultative ballot is carried out, planned strike action is suspended.

Unite have recommended members accept this offer, on the basis that it is the best available through the current negotiations, as the Scottish Government has tabled it as a ‘best and final’ offer.

We recommend members consider this carefully, understand how it applies to them and think abut what action beyond this offer might look like and vote accordingly.

The strike action by our members in Waste and Cleansing shamed the Scottish Government to bring the First Minister to the table. Thanks to their valiant efforts and sacrifices, they have won an additional £600m from the Scottish Government to fund the pay of all local government workers’. This offer would give each Edinburgh Council employee an average £1,444 more than they would’ve received without the strike.

A huge thanks to our members in Waste and Cleansing for their action to get us to where we are now in the pay talks.

Donate to the strike fund to support those affected by the dispute.

What the offer means in Edinburgh

Download our pay deal spreadsheet (XLSX) to see rough calculations of how the deal would apply to each spinal column point.

Get your vote in

The ballot is by

The ballot closes on 28 September.